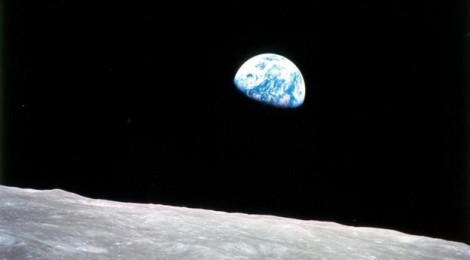 Apollo 8, How The ‘Earthrise’ Photo Was Made

The first humans to catch a glimpse of the Earth rising over the moon nearly missed seeing it at all, let alone capturing the snapshot that became one of the most iconic photos of the 20th century.

NASA has released an animation commemorating the 45th anniversary of Apollo 8, the first manned mission to orbit the moon. The famous “Earthrise” photo was taken on Christmas Eve 1968.

“It really came about by accident,” space author Andrew Chaikin, who narrates the video, tells NPR’s Morning Edition in an interview that will air Tuesday.

Comparing new data from the Lunar Reconnaissance Orbiter probe, which has been circling the moon since 2009, with the Apollo 8 astronauts’ photography and Apollo 8’s onboard audio, theGoddard Space Flight Center’s Scientific Visualization Studio has been able to discover just how serendipitous the famous snapshot was.

“It turns out that the only reason the astronauts saw the Earth when they did was because Frank Borman, the mission commander, was in the process of rotating the spacecraft — which was pointing nose down at the moon,” Chaikin tells NPR.

“It just so happens that as they came around, Bill Anders, the rookie on the flight over on the right side of the spaceflight, could see the moon coming up in his window. This had happened three previous times on Apollo 8, but they weren’t in position to see it,” he says.

Aboard Apollo, Anders is the first to see the potential shot: “Oh, my God, look at that picture over there,” he can be heard saying. “There’s the Earth coming up. Wow, is that pretty!”

But what happened next will sound familiar to anyone who remembers the days before digital cameras:

Anders (to astronaut Jim Lovell): “You got a color film, Jim? Hand me a roll of color, quick, would you?”

Anders: “Just grab me a color. A color exterior. Hurry up. Got one?”

Lovell hands him the film just as Anders is heard saying, “I think we missed it.”

But within seconds, Lovell sees the shot again in another window of the command module. He asks for the camera from Anders, who seems a bit defensive at having his role as mission photographer usurped.

Anders: “Wait a minute, just let me get the right setting here now, just calm down. Calm down, Lovell!”

Anders then gets the shot that has been reproduced thousands of times all over the world in the past 45 years.

“It sounds incredible to us to think, ‘Weren’t they looking for [the Earth] when they got to the moon?’ ” Chaikin tells NPR. “But as Bill Anders explained to me many years later, he said, ‘Look, we were trained to go to the moon. We were focused on the moon, observing the moon, studying the moon, and the Earth was not really in our thoughts until it popped up above that horizon.”

Meanwhile, on Monday, Lovell re-enacted another memorable moment from the groundbreaking mission: a Christmas Eve broadcast from lunar orbit. Lovell, Borman and Anders took turns reading from the Book of Genesis.

Lovell ended his re-enactment with the same closing the trio used on Dec. 24, 1968:

“From the crew of Apollo 8, we close with good night, good luck, a Merry Christmas and God bless all of you, all of you on the good Earth.”

The primary purpose of the Apollo 8 mission was to further progress toward the goal of landing humans on the Moon by gaining operational experience and testing the Apollo systems. However, a great effort was also made to accomplish worthwhile scientific tasks with photography and visual observations by the astronauts. It was obvious that one of the prime tasks should be photography of the lunar surface. During the mission, a major portion of the lunar farside was in sunlight. Although almost all the farside of the Moon had been photographed byLunar Orbiter, the spacecraft was generally rather far from the Moon, limiting it to an average resolution of about 100 meters. Apollo 8 photographs of the farside would have a much better resolution than existing pictures.

Cameras and Accessories
The onboard cameras for the Apollo 8 mission were modified Hasselblad 500 EL cameras, with 80-millimeter and 250-millimeter Zeiss panacolor lenses. For certain photographs of the lunar surface, a 60-millimeter lens with a reseau was used. Use of this lens and reseau is apparent in the views that show crosslike fiducial marks. For analytical purposes, black-and-white emulsions were determined to provide a higher degree of resolution and image clarity than the color emulsions; therefore, much of the photography is black-and-white

Orbital Photography
The Apollo 8 photography complements the extensive coverage of Lunar Orbiter.Lunar Orbiter provided excellent high-resolution coverage of the nearside of the Moon and Apollo 8 provided excellent coverage of selected areas of the farside. Many of the photographs derived from Apollo 8 were valuable for updating existing maps and charts of the lunar farside. The photographic equipment and materials carried by Apollo 8 were designed specifically to achieve the principal photographic objectives, which were to obtain (1) vertical and oblique overlapping, or stereo strip, photographs during at least two revolutions, (2) photographs of specified targets of opportunity, and (3) photographs of a potential landing site through the spacecraft sextant.

Much of this area was photographed by Luna III and the Lunar Orbiterspacecraft. However, the Apollo 8 photography was taken with different lighting conditions and at different viewing angles.

Photography of the Earth

This striking view from the Apollo 8 spacecraft shows nearly the entire western hemisphere, from the mouth of the St. Lawrence to the southern tip of South America. Central America is clearly outlined. South America, except the high Andes Mountain chain along the west coast, is almost completely covered by clouds.

Photography of the Moon

Most of the targets of opportunity were photographed in the first few revolutions. Among the more outstanding images are the near-full-Moon views of the eastern hemisphere. This frame is centered near Mare Symthii and shows that this mare is circular rather than irregular as had been thought previously.

Crater Giordano Bruno is shown in this image. The impact that formed the 20-kilometer-diameter crater was observed by five men on the evening of June 18, 1178, and was reported in medieval chronicles. No other similar events on the Earth or Moon have been observed during recorded history (Hartung, 1976).

The objective of stereo strip photography was to obtain two strips of stereoscopic photography from the farside terminator to about 60° from the nearside terminator. By taking an exposure every 20 seconds, each overlaps the previous one by approximately 60%. By combining the vertical strip with a second convergent strip, the geometry of the stereo view could be made stronger; hence, the ability to measure height differences would be better by a factor of 2.

These photographs were taken at high Sun illumination and show various geologic features such as mass-wasting debris on crater walls and numerous small, bright craters and topographic features that are barely visible monoscopically.

Approximately 90% of the photographic objectives of the mission were accomplished. Approximately 60% of the additional lunar photographs requested as targets of opportunity were also taken despite early curtailment of crew photographic activities. Many smaller lunar features, previously undiscovered, were photographed. These features are located principally on the farside of the Moon in areas that had been photographed only at much greater distances by automated spacecraft. During the mission, seven 70-millimeter film magazines were exposed and yielded more than 150 photographs of the Earth and more than 700 photographs of the Moon. Five 16-millimeter color magazines were also exposed.

Each film magazine would typically yield 160 color and 200 black and white pictures on special film. Kodak was asked by NASA to develop thin new films with special emulsions. On Apollo 8, three magazines were loaded with 70 mm wide, perforated Kodak Panatomic-X fine-grained, 80 ASA, b/w film, two with Kodak Ektachrome SO-68, one with Kodak Ektachrome SO-121, and one with super light-sensitive Kodak 2485, 16,000 ASA film. There were 1100 color, black and white, and filtered photographs returned from the Apollo 8 mission.