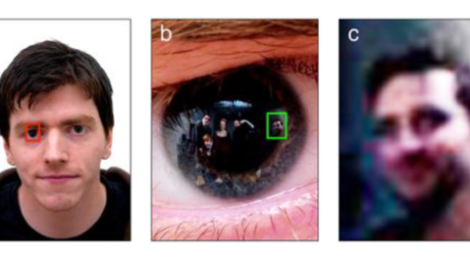 Can the eyes of photographed crime victims help authorities spot their victimizers?

According to new research published Thursday in the journal PLOS One, high-resolution photographs can be “mined” for hidden information. Specifically, the authors said that photographs of faces can reveal enough visual information on bystanders to identify them.

In a small sampling of 32 study participants, test subjects were able to spot familiar faces reflected in the pupils of someone who was photographed 84% of the time, researchers said. When the reflected images were of unfamiliar people, observers were able to match the person to a second mug shot with 71% accuracy.

By zooming in on high-resolution passport-style photographs, we were able to recover images of bystanders from reflections in the eyes of photographic subjects. Performance in the face matching task (Experiment 1) and the spontaneous recognition task (Experiment 2) indicate that these bystander images were not merely informative about facial appearance, they were properly identifiable to viewers who knew the faces.

Reminds me of that scene in Bladerunner, where Deckard can pan around a scanned still photo and find stuff hidden in the mirror and around the corner.

I guess the future is here – well Bladerunner was set in 2019, so we’re close!

← Getting in the Zone
North Park Christmas →