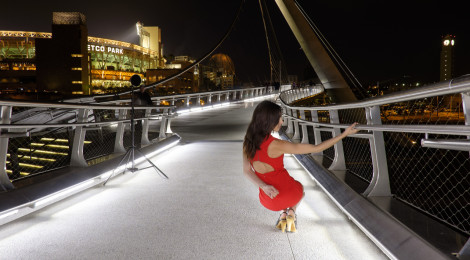 The X-Series cameras are a joy to work with when shooting low light and twilight photography.

The metering system is consistent, copes with difficult twilight scenes well, and the EVF and LCDs provide a good indication of exposure accuracy in-camera, ensuring that you get a good result for post production.

AF is also fully functional, even at very low light levels – and that’s a big improvement over many ‘older’ DSLR systems, where the AF really struggles as the daylight dims.

If you do find it’s too dark for AF, illuminate the subject with LED lighting or a flashlight to lock AF, then switch off the extra illumination before you take the shot.

Adding to the cameras in-built abilities, the photographer can start to work with external flash to illuminate the subject, whilst allowing the camera to take a longer exposure in order to capture the ambient illumination as well. Providing an in-camera blended image where both subject and background are nicely exposed.

This technique is called dragging the shutter.

You’re going to be shooting long exposures, so a tripod is a must – I use an oversized CF model to ensure stability, and added a 5 axis tilt head to make accurate leveling easy. The head has multi-axis levels built-in, so I know when the camera is level side to side, front to back, etc. This is important! I’ll explain more later.

You’re going to need fill flash – you can use on camera flash such as the Fuji EF-42, but in this case I’m using off camera flash, the Elinchrom Quadra unit, with 2 type A heads, and a Lastolite Hotrod strip soft box.

The Quadra system provides a great mobile source of light – with plenty of power, and the soft box provides a long and large illumination source, with head to toe soft light on the model.

I trigger the Quadra with a wireless Skyport trigger – as this allows me to adjust the flash power from the camera, without having to go back and forth to the Quadra pack – very handy!

I use the 2nd head selectively as a back-light or rim-light – fitted with a larger reflector, and grid to keep it focussed.

The set-up for the Fuji X-T1 is as follows:

Aperture priority mode is key, as we’re going to set the aperture based in the flash exposure, but let the camera decide the shutter speed to expose for the background.

With the X-T1 set up as above, we position the model in frame, position the flash primary and secondary, and take a flash meter reading using a hand held meter, at the models face.

We then transfer the aperture value from the meter, to the camera (in aperture priority mode) – and do a test shot.

The model should be perfectly exposed – you can fine-tune the aperture in 1/3 stop increments to adjust to taste, use the zoom feature in the EVF/LCD to review each test frame in detail.

Next we review the background illumination.

The camera is choosing a long exposure, based on the average ambient metering, and we can review how much lighting from the sky, buildings, street lighting etc is visible with the camera’s chosen exposure.

We can then fine-tune this by using the exposure compensation dial on the camera.

This ONLY impacts the ambient background illumination, and does NOT effect the exposure of the subject with flash.

This is key, you can now adjust the background illumination independently of the subject illumination, for an optimal in-camera exposure.

You are now set, and ready to shoot – use a shutter release or the self timer function to avoid camera shake.

With no flash firing, and just the background ambient illumination, you can see that the model is underexposed against a nice twilight cityscape.

Ambient Only – No Flash

Adding flash to the mix, we get a nicely illuminated subject against the same well exposed twilight cityscape. 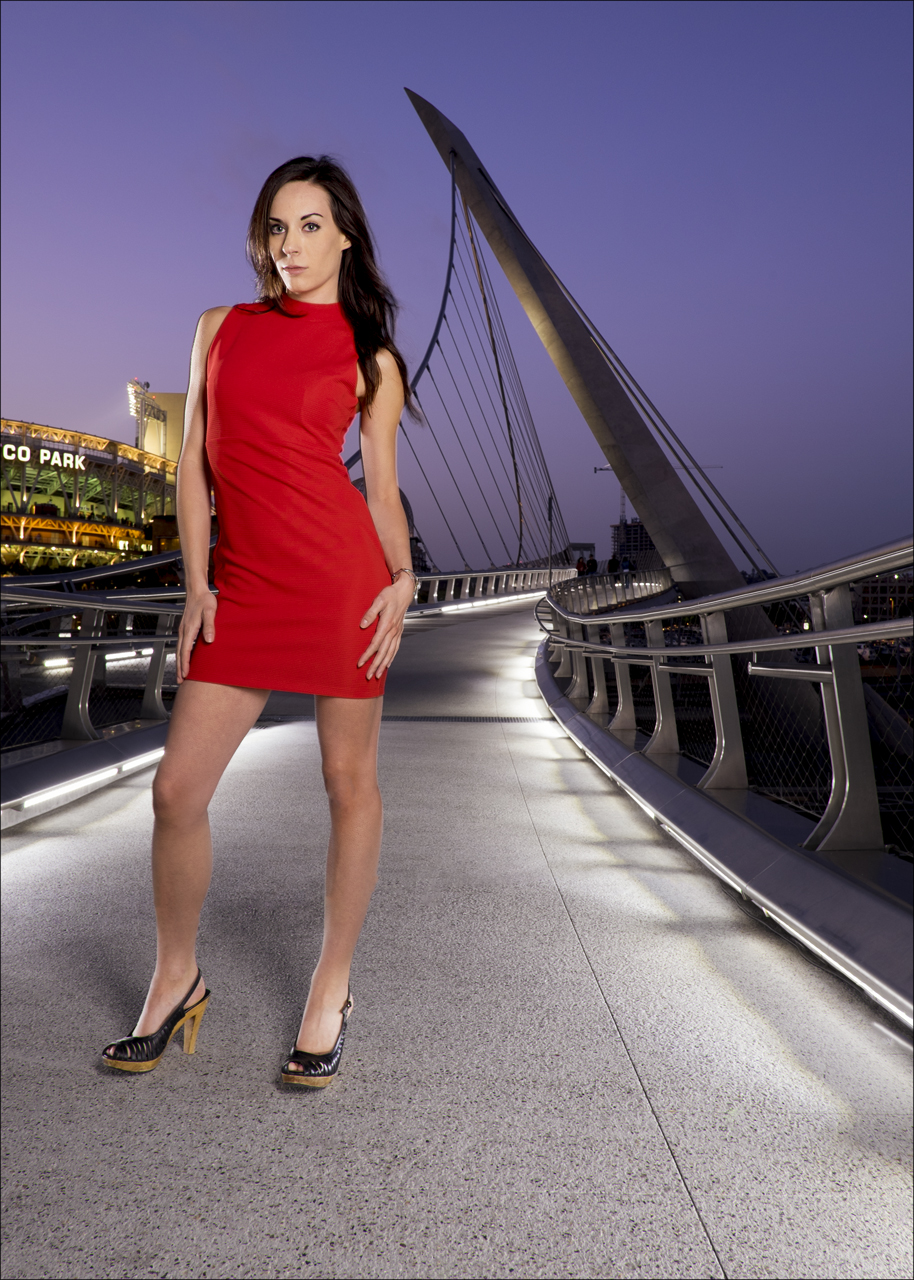 We can adjust the exposure compensation dial to adjust the level of background illumination, to achieve the desired look. 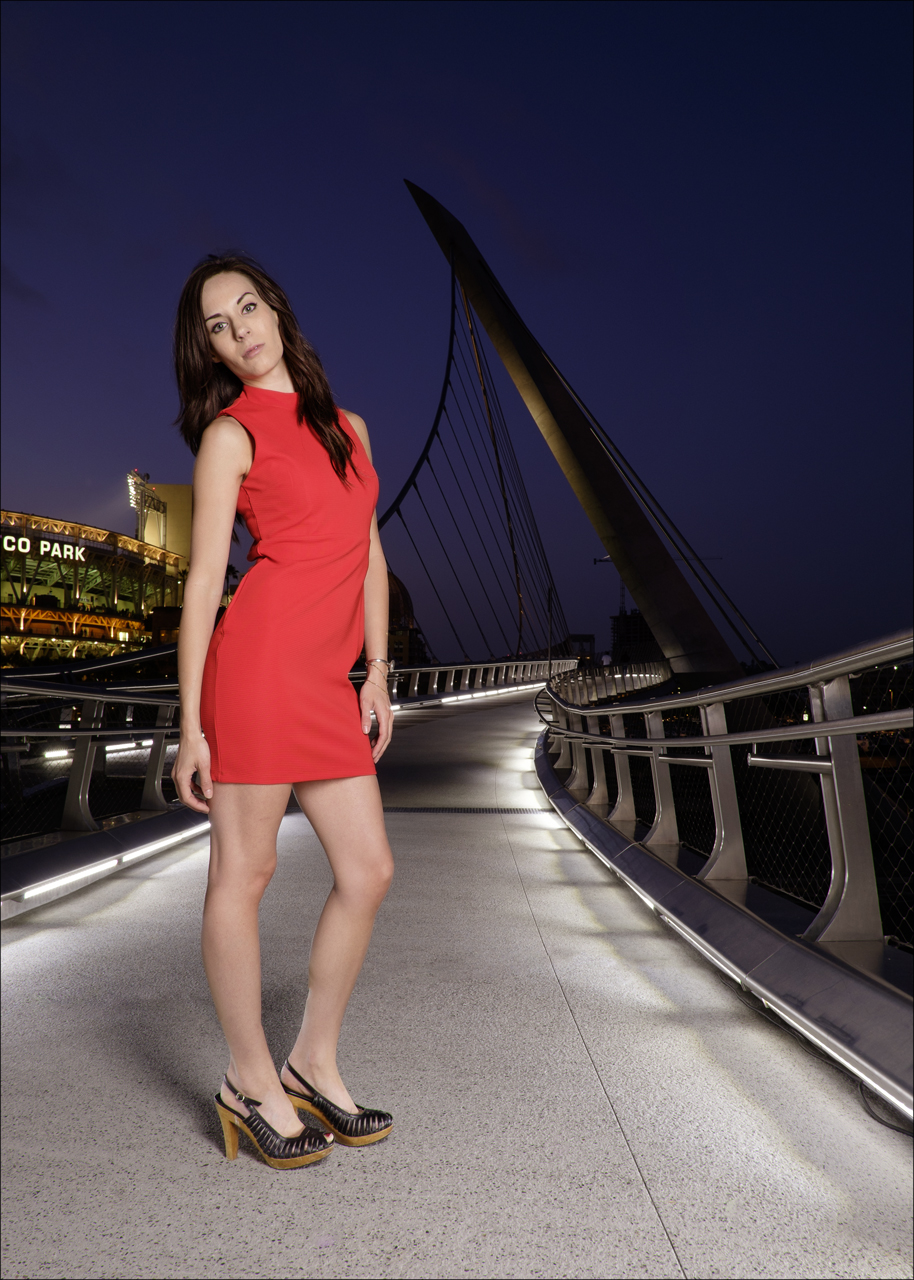 And as the light levels continue to fall, the camera will automatically adjust the shutter speed for you, leaving the aperture untouched.

This means that you can focus on shooting, and not have to worry about constantly changing the exposure settings on the camera – it’s all auto from here on in!

This is a useful and powerful technique, that sounds more complicated than it really is.

In effect, the camera does all the hard work for you, once you’ve set the aperture for the flash exposure.

The final image is powerful, and doesn’t rely on post processing tricks to make it happen – it’s all done ‘in camera’.

Thanks to my wonderful model Kate J – and to John Edmund for his support and BTS shots.

More images from this shoot can be found in this FLICKR Album.