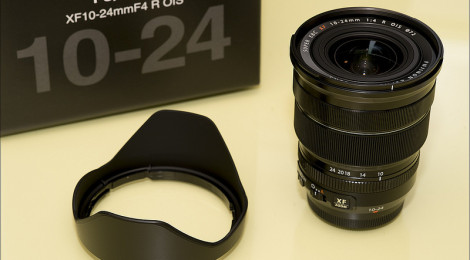 This is a lens that’s been eagerly awaited – a super wide, without he fisheye distortion present in the 3rd party super-wides that are on the market for the X Series.

(Click on any image for a larger size version) The lens has the same construction quality as the 55-200, with a nice positive zoom, with no sloppiness or creep evident.

It has an unmarked aperture ring, which is unusual for an XF lens, and when I asked one of the Japanese lens engineers from Fuji about this, he really couldn’t explain why they had departed from the more usual marked aperture ruing system for this model.

The end result is that you will have to review the Aperture setting in the EVF or on the LCD – this may bother some people, but in the end it’s a non-issue for me. The lens has a plastic petal type hood, which is pretty typical for a super-wide – fit is positive, and it can be fitted reversed for storage.

The lens features OIS, which may be overkill for a super wide – although I know some folks will value this for low light hand-held use. The front element is large – and sports a 72mm filter size.

The lens is physically similar in size to the new 56mm lens, and quite a bit bigger than the original 35mm lens, or later 23mm lens.

AF is fast and silent – in fact it hardly seems to move at all – which you’d expect with the super wide DOF of a lens of this focal length.

Initial tests of close focus indicate that it has accurate and fast close focus, and a short close focus distance – I’ll test more of that later.

Initial test shots from this morning at the Salk Institute have all focussed on the lens being used at wide zoom settings, with stopped down apertures for max DOF. Good DOF test – close focus on the near field tile You can see the keystone effect with the camera now tilted up wards – you could correct this in post if you’re after a more T&S architectural shot. Nice consistent exposure across the image – corrected both optically and digitally in camera (no doubt).

Mid ground focus in this shot – definitely diffraction coming into play at f/22 as expected – always a trade-off between DOF and diffraction, even more so with APS-C. Focal point moved out towards the more distant structures.

The X-T1 was triggered via WiFi with the Remote Control App, to avoid my shadow being in the shot. (You can still see the camera’s shadow of course)

Much more testing to do – focal lengths, varying aperture for DOF and optimum sharpness, etc.

Initial impressions very positive – the lens gives a non-fisheye super wide view, and appears to have been very well corrected for distortion and vignetting.

I can see this lens getting a lot of use for architecture, and landscape work.

More images to follow as I continue to explore it’s capabilities.