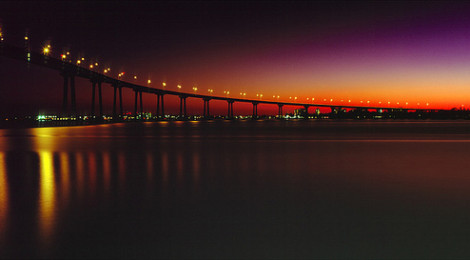 Night Exposures – In a Jiffy

I love shooting after sunset – the limited dynamic range of twilight, the rich colors in the sky after the sun has long gone, the twinkling lights of a distant city, the trails of car lights along a freeway.

The problem comes when you try and estimate the exposure in these lighting conditions. If you have an old school film camera, your meter may not work at such low light levels, or you may not even have a light meter on the camera.

Your hand-held light meter might get you a reading – but it’s most likely going to have to be a spot meter (not cheap), and even then, you have to figure out what to point it at, and what that reading would mean for a ‘correct’ exposure.

Your modern digital camera might be a good bet – the metering is more advanced, you often have a live view histogram to view exposure information, and you can at least review your shots as you go, and make adjustments accordingly. But even modern meters can be easily fooled by bright point sources, or highly contrasty scenes – and photography after dark is full of both!

So here’s where you roll back the clock to 1968, and pick up The Jiffy Calculator – For Night-Light Exposures.

This is a cardboard ‘slide rule’ – given away on the cover of Popular Photography in 1968, and originally designed by one S. P. Martin.

Mr Martin’s idea was simple – list out a range of possible lighting conditions that the night-time photographer might face – number them from lightest to darkest.

You go down the list and find the nearest fit to your lighting conditions, then find that scene number on the front of the calculator, and slide the internal ASA film speed card to match your film ASA against the selected scene number.

Now I look across to the F-Stop column, and find the aperture I’m using.

I transfer these settings across to my camera, and take my shot.

Now if this is digital – I’m probably good to go.

But if it’s film, then I need to take film’s reciprocity failure into account – unfortunately film’s response in low light is anything but linear, so a good practice is to take additional shots at 1 stop either side of the recommended settings.

This bracketing should get me a clean, well exposed shot.

Now this may all seem terribly old fashioned, but time hash’t changed the basic physics behind these exposures, so information from 1968 is just as relevant in 2014.

And it gets you in the ballpark on the first shot – no more guessing and cursing.

You can find the original Jiffy Calculator on EBAY, or modern printed versions in online stores, or you can go DIY and print and make your own.

Just download and print this PDF, and you could have your own Jiffy Calculator, in a jiffy!

Worth slotting into your camera bag – it’ll save you a lot of time and frustration.