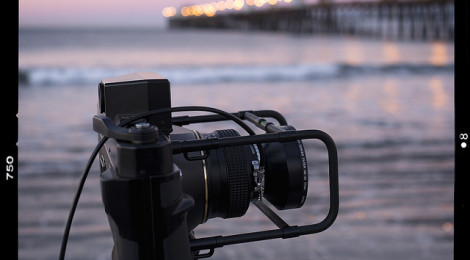 Up early with the Fuji G617, shooting the twilight and setting full moon, the location is Oceanside Pier, CA. Here’s my 4 shot haul from this morning’s trip to Oceanside – laid out on the light-box.

As you can see, the colors in the sky come through much stronger with the Velvia, but the shot is underexposed, probably due to the rather severe reciprocity failure of the Velvia 50.

It’s hard to calculate exactly, so I’ll just have to learn by trial and error.

Here’s the second shot – my first vertical panoramic with the G617 – getting the vertical lined up was a challenge, I need to get me one of those hot-shoe 3-way levels for this!

I like the format, I just need to figure out good comps to use it on.

Of course it may be that the scene simply had too much dynamic range to capture on the slide film – I need to take my time and meter the shadows as well as the highlights next time, and figure out whether the film can ‘see’ that spread of dynamic range.

I was so out of sorts setting up the new camera in this vertical mode, that I completely forgot my basic zone metering!

Shot #3 was similar to shot #4, but shot #4 has better dawn colors, so here it is the full moon over Oceanside Pier:

This was 6 seconds at f/22, counted manually (one one thousand, two one thousand etc) – with a few extra seconds thrown in for reciprocity.

I love the way the Velvia picks up the lavender tones in the twilight lighting – 6 seconds doesn’t give any real issues with reciprocity failure (approx. 1/2 stop), so the exposure is pretty much bang-on what I expected after spot metering the sky, and using zone to get my camera exposure time.

I’m really enjoying the whole Velvia process – It’s as if the film comes with Photoshop and NIK ColorFX built-in, which of course it does if you think about it.

Fuji have taken the time to develop a film that sees the world in a very bright and vivid way – and that’s really appealing to me.