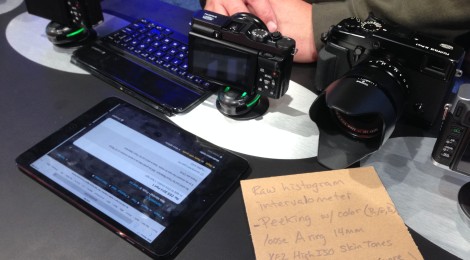 Notes from the Fuji team on the CES stand today

My random scattered notes from today – covering a wide range of topics and questions:

Initially they said 24 feb for the 56mm, then said  Mid March – so looks like some movement possible there. They ended saying 56 and 10-24 both mid march for sure.

When asked about the lack of camera release in the X-Series at CES this year, it was noted that there is a bigger show in Japan at the end of Jan…. so I will be watching that show closely.

There was no discussion on weatherproof lenses – the suggestion seemed to be that this was an InterNet rumor rather than a manufacturer statement at this point.

They did confirm constant 2.8 zooms this year (as we knew) – they are going for the high yield lenses first rather than the niche lenses – filling out the key primes and zooms.

The 700k number likely came from someone in R&D, rather than in sales – they were unsure as to the source – they were very happy with 700k sales given the starting position 3 years ago.

Fuji are very happy with the pro level sales – The cameras were aimed at a high level, and are hitting that target audience.

The Fuji philosophy is a  unique technology, setting new standard for category

Fuji feel that X-Trans MKII sets a new quality bar  in APSC – this is a key aim for them.

They do want to be the best at APSC.

The confirmed that it was a deliberate policy to put top sensor into the low end bodies – to get greater exposure and to give people value.

At the lower end where they used Bayer, they asked ‘does the customer at $599 look at the sensor type?’ – they decided mostly not.

Cost is the key factor for going non X-Trans in the low end X-Series camera body.

But even this model still introduces people to the X-Series lens range, this is the key point.

They see the XA1 as the current use of the x100 technology, two years down the line from the X100

An inexpensive entry point – Because the profit is in the lenses more than in bodies, over time.

Fuji don’t have third party threat to lenses sales, unlike Canon and Nikon – no Sigma steeling their sales – they see this as a key advantage.

They see Canon is still all in for DSLR – Nikon somewhat all in, but hedging their bets a little

The rankings are Nikon, Canon, Sony, Fuji Samsung according to sales data

This does not include DSLR.

It is the Fuji bridge cameras which provide volume sales – Fuji have a long history in this sector – very strong seller for them.

More images being captured and then printed drives revenue, profit, and pays for R&D.

The recent Reuters article was taken as a challenge.

They note the article didn’t give a timeframe, just said ‘the world was ending’ – but never said when – so a rather pointless unqualified statement.

Fuji answer this sort of thing by laying out the roadmap for lenses,  for example.  Showing a long term commitment and strategy.

They see full frame as more of a marketing hype, a buzz phrase that people latch onto – real photographers don’t think ‘do I have FF?’, they just use the tools to get the results.

Fuji see that their lens optimization software is key to the range – A unique selling point for Fuji, although others have some of the technology in their lenses/cameras.

More firmware upgrades in a couple of weeks – live manual exposure preview and file naming for the X100 mentioned.

No tethering on current models – long term viewed as a maybe, not seen as a high demand or essential feature for most users.

No firm info on color focus peaking – but work under way.