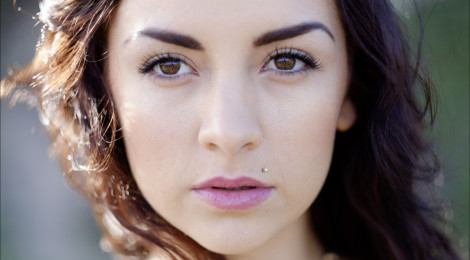 One of the main reasons for buying a lens like the new Fuji XF 56mm f/1.2, (and the VG-XT1 vertical grip for that matter), is to shoot professional portraits, at wide apertures.

Sure, you can use them for a million other things, but they are designed to make portrait shooting a wonderfully pleasurable experience.

I took them on a model shoot with Mikah and Dori, in Del Mar California, to find out.

The X-T1 and 56mm performed superbly. The camera was responsive and the EVF was easy to use even in bright sunlight.

AF was fast and accurate – I dropped the AF box down one size, and positioned it over the eyes for each shot.

DOF was razor thin, so care had to be taken not to focus and recompose, as this introduced the possibility of a mis-focused shot.

With such wide apertures in daylight, I used a 4 stop ND filter to keep the shutter speeds in range.

The lens reminds me of my Canon 85mm f/1.2L – another portrait specialist – it has that smooth bokeh and wonderful contrast – it just makes people look gorgeous!

I’ll say it here, now that I’ve used the camera and lens combo in anger – they are going to get a lot of use in the studio, and for location shooting.

Lighting – all natural daylight on this set – no reflectors or flash.

We took care to position the models so that they had no direct sun on their faces, or hot spots of sun hitting ears/noses etc.

I bumped up EV a little when shooting into sun, to compensate for the camera metering seeing bright light and trying to back off exposure.

We chose dark backgrounds to allow the hair to stand out when backlit by the sun.

Shooting into the dark cliff with Dori, I backed off the EV a little to avoid the camera over exposing her face. I used the rear LCD to make a judgement on exposure compensation.

I used Fuji’s ASTIA/SOFT film simulation in ACR 8.4 to get a consistent film-like color palette – This is a really nice film sim for portraits and skin tones. Astia also adds some nice contrast in the dark tones, something which is usually missing from the base RAW file.

I then used NIK to sharpen files in Photoshop CC, and standard photoshop tools for skin touch-up etc.

Thanks to Britt for all of her help setting up the shoot, and to Mikah and Dori for making the whole shoot a great experience.