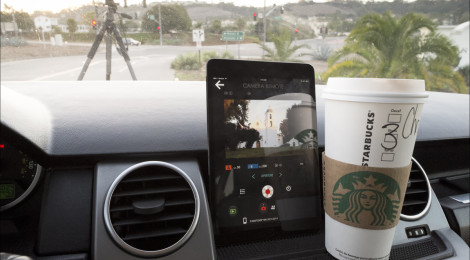 One of the new features on the Fuji X-T1 is the ability to tether the camera to a smartphone or tablet device via WiFi.

Initially I figured this was somewhat of a gimmick for the FaceBook generation, so that they could quickly upload their selfies, which indeed they can.

But after I’d downloaded the App from the Apple App Store – and installed it on an iPad Mini, I came to a different conclusion.

This is actually rather useful!

The App gives you a number of options: (Clink on images for larger versions)

For today I’m going to focus on the Remote Control features.

The camera can be configured to have a custom name (SSID), I quickly edited mine to add my initials.

It shows up on channel 10 – no idea if this varies at all from time to time or model to model, I’ll test more as time goes on.

WIth the X-T1 transmitting WiFI, you then go to your WiFi enabled device, and look for the X-T1 WiFi SSID – when you see it, you connect your device as if you’re joining that WiFi network. The first time you connect with a smart device, the camera asks if you accept that connection – this prevents unknown users from taking over your X-T1!

You do not need any other WiFi network (WLAN) in place to make this work. You can be in the middle of nowhere, and it’ll work perfectly. You are in effect building a two device WLAN, with the camera and your smart device.

The two devices are now paired, and the App displays a live picture from the X-T1, along with all the settings currently in place.

The image is live, i.e. real time – so you can see movement on your remote device, and should be able to trigger the camera to capture something that’s moving in front of the camera.

The image display is also showing the film style chosen – so if you  selected B&W, you’d see the B&W image on the remote device in real time – so it behaves just like the EVF/LCD.

You don’t get all of the HUD info from the camera – no focus distance, horizon etc etc Not sure how much of that would be relevant to tethered shooting?

There’s also a menu to the side of the shutter release, which allows you to change the settings on the camera remotely.

So you can override the camera’s settings for ISO, Film Sim, WB, Macro, Self Timer.

On the main screen you can adjust aperture remotely, trigger video recording, and also go to a playback screen to review the images stored on the camera’s SD card.

You can retrieve these images to your device over WiFI – I think only JPEG versions, but I have yet to RTFM!

As it was rather chilly this morning, at least for California, I decided the new feature would due put to good use.

I set up my camera on it’s tripod, ready to shoot sunrise at the Mission – and then paired it with my iPad Mini.

I then retreated to the warmth of my car, to sip on my coffee, and wait for the sun to come up.

I could control the camera, see what it could see, and take shots, all without having to go back outside.

I could also select the point of focus for the camera, simply my pointing at the image on my iPad – the camera focus square moved to cover where ever I pointed, and the camera refocussed.

When I saw that the light was right, I grabbed my shot – the camera triggered as soon as the remote shutter release button was pressed.

I then decided I’d like to try a mono version with red filter, so selected that via the iPad, and took another shot.

At all times I could see what the camera was seeing – so I was able to flick through the Orange, Red, and Green filters in Mono mode, and see the effect, before selecting which one I wanted to use.

When I was done shooting – I disconnected from the remote control App, and the camera went into sleep mode.

I can see this being useful in the studio, for tethered shooting with live image preview and also image retrieval over WiFi.

I could see in really harsh conditions that remote tethering would due a huge bonus, keeping the shooter warm and dry.

Also in the field for nature photography, where the camera is remote controlled from a hide in order to get the camera closer to the subject without direct human presence.

Also in sports, where you could put the camera in ‘harms way’, perhaps trackside, or behind a soccer goal, and not only trigger it, but remote control it’s settings, and retrieve files for upload to the media – before the event has even ended.

I’m sure people will come up with other inventive ways to use this new feature on the X-Series, and I’m looking forward to continued App development fro Fuji, or perhaps third parties, if Fuji release an SDK for the interface.

The remote app is available for iOS and Android devices at this time, and is free to download.

A few more tests today on the remote App

Real time image refresh on the remote device within 10ft from the camera.

Outside of 10ft, the frame rate drops as you move further away and stops refreshing/working past approx 30ft.

When the X-T1 is set to BULB mode, the Remote App sets itself to 30 sec exposure, and allows you to adjust both exposure time and aperture, but DOES NOT allow BULB mode to be used from the Remote App. So this will not help astro photographers.

There may be an issue here with maintaining a ‘shutter press’ in BULB mode via WiFi – i.e. having the camera know when you pressed the remote shutter is one thing, but having it then continue to keep the shutter open until you release it would suggest additional or even continuous communication between smart device and camera.

I’m sure that’s all solvable – but folks will have to request updates for this from FujiFilm.