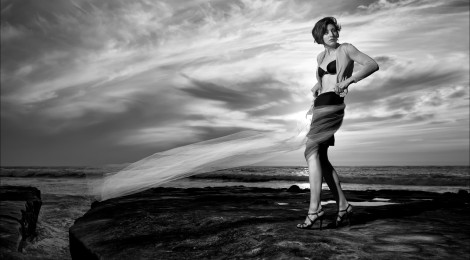 One of the ongoing ‘issues’ with the current X-Series line-up, appears to be the lack of a Fuji pro flash rig.

The best we have at this time, is the EF-42, which appears to be a reworked Sunpack unit.

It does a good job of providing on-camera TTL flash, with bounce capability, and also a very acceptable daylight fill-flash.

But as soon as you want to go off-camera with your flash, you’re going to have to go away from Fuji to get what you need.

Even using the EF-42 with an off-camera cord will mean that you’re sourcing a Canon compatible cord, as Fuji don’t yet manufacture/sell one of their own.

Assuming you want to take things a little further, you’re looking at a third-party flash unit, and doing away with any form of wireless TTL operation, as at this time no-one manufactures a wireless link which will send/receive the TTL data in Fuji X-Series format.

This sounds like a big issue, but in reality, when you’re getting into pro off-camera flash, you’re already moving into the realm of manually metered/set flash units – so maybe it’s not such a big deal after all?

I decided to give the X-T1 a test with the excellent Elinchrom Quadra Hybrid portable flash system – the flash system  favored by Fuji X Photographer Damien Lovegrove.

The Quadra is a fully portable, battery powered flash system – with 400 Ws output – equally at home in the studio or outdoors.

The heads are very compact, yet really pack a punch, and the battery packs are small and light enough to carry pretty much anywhere for a photoshoot.

The heads can be used bare, or fitted with a wide variety of diffusers, umbrellas, and soft-boxes – there is even an adapter to allow the full sized soft-boxes from the Elinchrom studio range to be used with this portable system.

The head is light enough to be positioned above the subject on a hand-held boom arm – or can be attached to a lighting stand for more static placements.

The head has a built-in modeling light, useful for determining the fall of the light, and this is a daylight balanced LED light, so is very battery friendly.

The Quadra pack comes with a built-in wireless receiver for the Elinchrom Skyport hot-shoe mount trigger system – and can also be controlled from computer or smartphone with suitable WiFi hardware and free Elinchrom software.

Each pack can drive two heads – with the power split 60/40 between the two. The pack can be triggered via wireless, optical trigger from another flash, or via a standard PC sync cable.

Flash output power can be adjusted from the pack, or from the hot-shoe mounted transmitter, or via a computer/iPhone software if used.

For this fashion shoot in La Jolla CA, I used a single Quadra pack and a single type A head, fitted with it’s standard diffuser cap. The head was mounted on a stand and boom arm, at about 8′ off the ground, illuminating the model from her front right hand side.

So how do we achieve this look with the X-T1?

* Firstly, we set the camera’s ISO at the lowest normal setting – ISO200

This gives us best image quality and keeps the shutter speeds as low as possible – critical for syncing camera with flash.

* Then we use the camera’s inbuilt metering to set the correct aperture for the ambient lighting in the scene. (Take a test frame to verify this – check in the EVF and make sure you’re happy with the exposure.

* Next, we’re going to deliberately under-expose the background to make the model pop, and to add more theatrical drama to the shot – this is a common feature of current fashion shots, and does add a lovely stage-like look to the lighting.

* To do this we close the aperture down one stop from our chosen ambient setting – you can go to 1.3, 1.6, or even 2 stops – you’ll have to gauge what works for the scene/theme.

For the shot above, we’re 1 stop down from ambient, and now we bring in the flash system.

* The head is placed above, and in-front of the model, and the LED modeling light is used to figure out the correct direction and coverage.

* Switch on the on-camera trigger, and shoot a test frame.

* Review this in the EVF – zoom in and check in detail for exposure/over-exposure.

* Adjust the power of the flash up/down as required – or move it closer/further away.

* Do a second test shot and review in the EVF – zoom and check for exposure and any high spots which would indicate over exposure.

* At this point you’re dialed-in, or close to – and you can make any final tweaks before the shot commences.

You have only ‘wasted’ a couple of flashes getting set up – this is important as you can only shoot as long as the battery lasts – approx 140 full cycles.

One other note: If the aperture you’re using is too closed down for your liking – so for example, you now have too much depth of field, you can use ND filters to modify your aperture setting.

For this shoot I used a 4 stop ND filter (Hoya Pro) to open up the aperture to where I wanted it to be.

Fill-Flash with background 1 stop under exposed

You should get a nice dramatic look – with a well exposed subject, and slightly moody surroundings.

If you want to adjust the background brightness down further, you can up the shutter speed on the camera – as long as it’s still below sync speed – this will ONLY impact the exposure of the background, as the flash illumination is so fast that shutter speed has zero impact on it’s exposure.

Or, if you are already at the max sync speed, you can close down the aperture a little, and adjust up the power of the flash to compensate – this will get you a darker background, yet the model will be illuminated at the original level.

As the daylight level drops away towards sunset, you can compensate by lengthening the shutter speed on the camera – again, this only impacts the exposure of the ambient light, and it keeps the flash exposure consistent.

As your shutter speed lengthens, the speed of the flash will still freeze the subject cleanly – the flash on the Quadra A head is 1/6000.

If the shutter speed drops below your comfortable hand-held minimum – you could use a tripod, or you can adjust the ND filter in use, or adjust the camera’s ISO level.

Of course the later two options will require the flash level to be adjusted again, the tripod method will keep the flash exposure consistent. 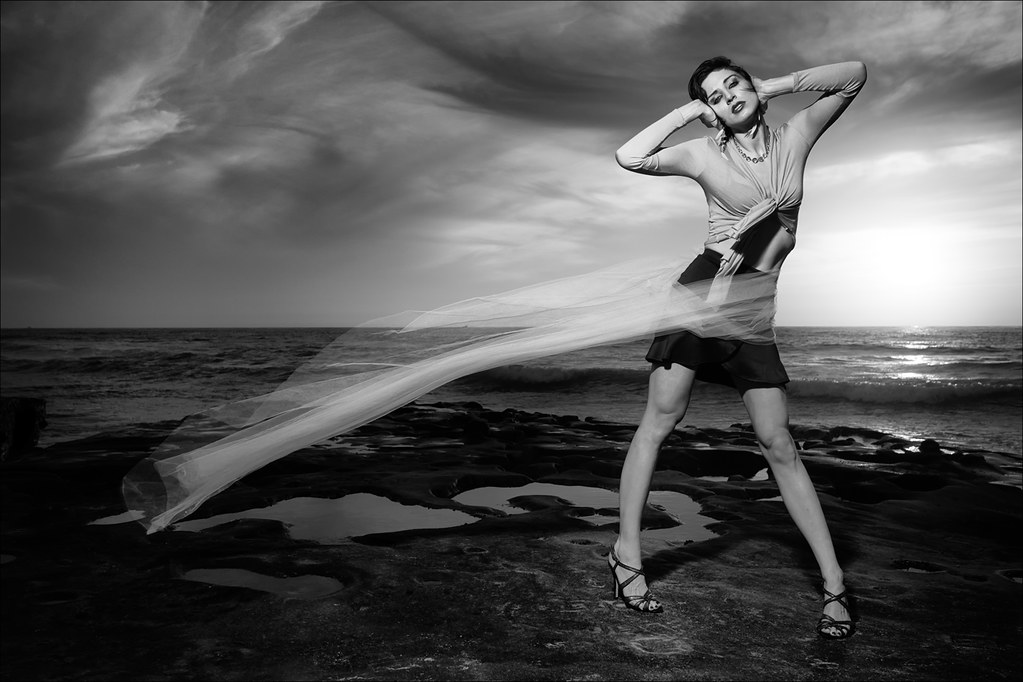 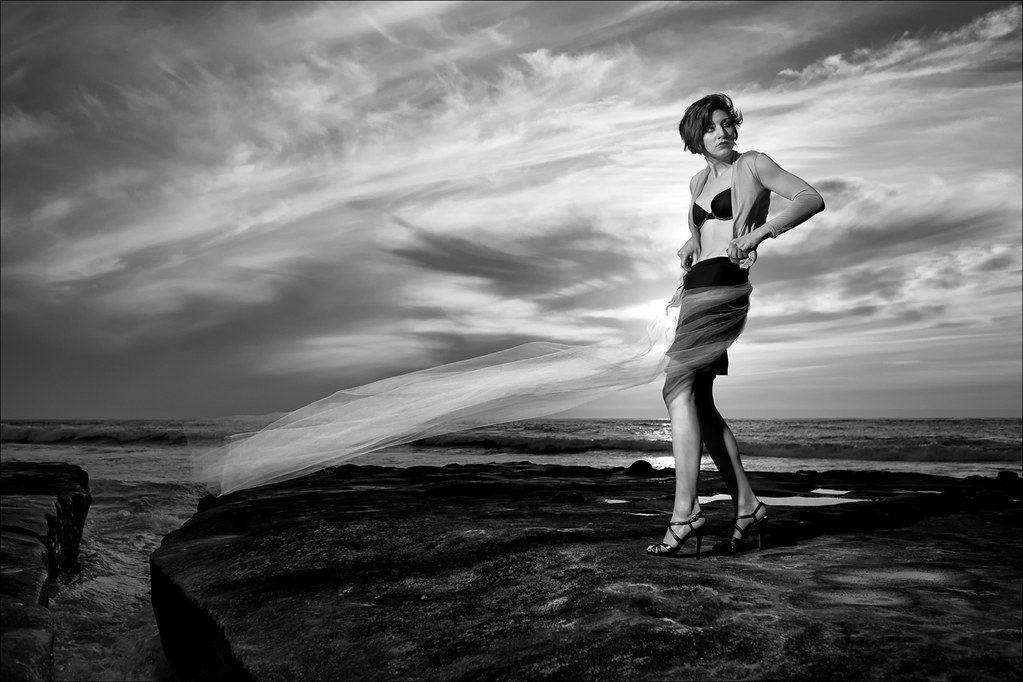 The full set from the shoot is posted here – complete with EXIF data.

The great thing about the EVF in the X-T1, is that it can be used to accurate judge the exposure balance in the final image, even under difficult lighting conditions.

You don’t even need to use a light meter for tho sort of work, although clearly you could if you wanted to.

Modern EVF/LCD equipped cameras like the X-T1 make this type of photography easier to achieve, and allow you to be assured that you have the shot in-camera before you wrap the shoot.

You could also use the WiFi in the X-T1 to export images to an iPad or laptop for immediate detailed review – as an additional check-point during the shooting process.

The lack of any TTL control of the external flash heads is a non-issue, and although the above process may sound complex on a first pass, it quickly becomes second nature.

In reality, for a shoot of this nature, TTL control would be a waste, as you’d probably just override it anyway!

My model, Christine Johnston, was a total rock-star on this wet, cold and windy shoot, and was booked through Expressions Unlimited Photography.