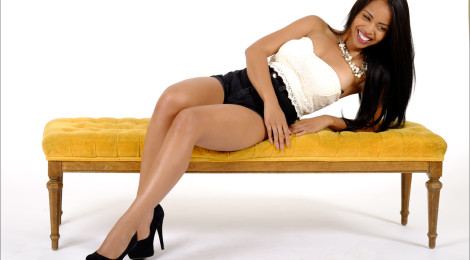 X-T1 in the studio

Having trialled the X-T1 (and 56mm lens) extensively on location shoots, it was time to put it to the test in a stdio environment, with wireless studio flash.

Studio shooting typically involves one or more remote strobes, triggered via PC Sync cable or wireless triggers, so the Fuji would be in full manual mode, and relying on external metering and the EVF/LCD for judging correct exposure.

The quantity of available (flash) light in the studio typically means that you’re shooting stopped-down to f/8 or below – and this introduces an interesting challenge to the X-System Fuji shooter with EVF/LCD.

When you have the camera in fully manual mode – where you set the shutter speed to 1/180 for flash sync, and the aperture to a value determined by your hand-held flash metering (f/8 for example) – your EVF/LCD shows you a representation of the ambient light exposure in the room by default – which will most likely look like a black hole!

With no flash included in the live view, the ambient light is just not enough to illuminate the subject at say f/8 – it’s all dark, and you can’t see the model, let alone their expression!

There is a fix for this, buried in the Fuji’s menu system.

You access the SCREEN SETUP menu, look for  PREVIEW EXPOSURE IN MANUAL MODE, and switch this to OFF.

This fixes the problem for studio use – the EVF/LCD now shows an ‘enhanced’ view of the scene, where the camera boosts the available light in the display for focusing etc, independent of the final exposure settings.

You can also increase the AF box size by two clicks over standard to improve AF response in the low light of the studio – worth experimenting with.

With that issue resolved, we can now look at triggering the studio flash heads.

The X-T1 has an old-school PC Sync socket, so you can use a standard sync cable to do this – the downside of this is that you have a cable trailing across the studio for people to trip over, or to snag on light stands etc.

Not a good long-term plan.

The solution is to use a wireless trigger system for your studio flash.

You have a couple of options here:

Optical Trigger – Using a small camera mounted flash (such as the EF-X8) – set the studio strobes to optical triggering – they will fire when ever they see the initial flash from the on-camera flash.

This method is cheap/free – but will require you to dial down the flash from the on-board flash unit, to prevent it from impacting the exposure of the subject in the studio.

Wireless Trigger – using one of the many 3rd party trigger and receiver units available to provide a wireless (non-TTL) trigger from the camera to the studio strobes.

This used to be an expensive option, with units from PocketWizard costing many hundreds of Dollars.

However, in recent years we have seen a flood of cheap, basic triggers, which will do the job just fine in this basic scenario.

For this shoot I used the CowBoy Studio’s 4 Channel trigger and receiver set for studio strobes – cheap as chips, and they do exactly what you’d expect.

The small transmitter fits to the hotshoe – the receiver plugs into the strobe’s trigger port – couldn’t be much simpler to set-up.

You can test fire the strobes from the transmitter using the TEST button on top, and I use this when I’m metering the flash output to gauge the correct exposure.

I use a hand-held Sekonic meter to check my flash exposure.

You point the dome at the strobes, from the model’s position in the studio, and meter the flash from there.

You transfer the meter reading across to the Fuji, making sure your shutter speed is at or below the 1/180 official sync speed (You can sometimes get away with 1/250 – test before you rely on this though).

Make sure the trigger is ON and connected to the receivers, and you’re ready to shoot.

From here I can adjust over-all exposure  up or down as required, and also tweak individual light position and brightness to start to shape the look of the final image.

I’m looking at the dimension the lighting gives to the subject, the amount of shadow and shadow detail (especially important with darker skin tones, which can loose shadow detail quickly), as well as catch lights and background lighting.

In this case I went with two ProStudio strobes firing into silver umbrellas, placed either side of the model, and slightly in front of her.

The left hand light (as we look at the image) is the key light, with the right hand light as fill.

The backdrop was illuminated with the spill from both lights, and was a simple white ‘endless backdrop’ roll of paper.

If you wanted a harder white backdrop, you could drop-in additional lighting at the back, to blow this out to pure white.

The 56mm Fuji lens really is a winner  – stopped down to f/9 in this case, this thing is razor sharp.

Working distance for full length portraits was not excessive – so a small-medium sized work area was more than sufficient.

Moving to a more muted lighting set-up, I dropped in a black cloth backdrop to absorb as much light-spill as possible, and moved to a single soft box, with grid attached to further limit the lighting spread.

This allowed me a great deal of control over the lighting, and with careful placement and metering provided a beautiful soft light, with enough specular highlights to really show of the glow of the model’s skin.

A quick check on the EVF confirmed exposure, and was also useful to show the model how the lighting set-up was looking.

This is important, as it builds confidence, and just that slight attitude change, knowing that they look good, can make a world of difference.

The final results from the studio test confirmed that the X-T1 was more than up to the task, and in fact provided a preferable image output to my previous standard (Canon 5DII).

The 56mm f/1.2 is a class leading portrait optic – beautiful bokeh wide open, and true and sharp stopped down.

I’m looking forward to taking this further with additional shoots – photographer, model and client are all happy at this point.

Many thanks to my wonderful model, Brittney C.

← X-T1 at the Beach
More Fun with Face Detection →