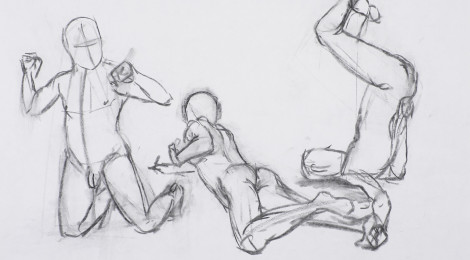 Interesting job today, I was asked to photograph a series of original pencil and charcoal drawings for a young artist, to provide a digital version of her portfolio.

I took along a portable lighting set-up, my Induro CF tripod, my iPad, and my X Series Kit, including the X-T1.

I set-up the lighting in a spare room at her house, figuring that it would be easiest to shoot the art lying flat on the floor, rather than up on a wall.

I mounted the X-T1 on a 5 way Induro head, and set up the tripod with the front two legs spread wider than the third (rear) leg.

This gave the tripod a forward lean, which made shooting vertically down much easier. Vertical orientation was confirmed using the built-in levels on the Induro head.

The main light was positioned above the artwork to the top of frame, and the two smaller lights were used to provide fill-light from either side.

This provided a very even illumination over the area of the art – and I checked this using a good ambient light meter.

The next issue to address was white balance – especially important when shooting artwork, where color reproduction is critical.

To ensure accurate WB, I place a Kodak Grey Card in the center of frame, lit by the daylight CF lighting, then used the CUSTOM WB feature on the X-T1 to grab the central area (bounded in the white box) and use that to set a reference WB in camera.

This ensures an extremely accurate WB – and leaving the camera set on CUSTOM WB allows you to place a wide variation of art in frame, without the camera being fooled into changing WB.

With Exposure and WB worked out – I then selected the lens I needed to cover the various sizes of art, in this case the 35mm f/1.4 lens – which I set to f/8 for optimal resolution and sharpness.

The final stage was to link the X-T1 to my iPad MINI using WiFi and the Fuji Remote App.

This allowed me to see the positioning and lighting of the art in real time on the iPad screen, show the client the camera image live on the iPad, make adjustments to shutter speed and point of focus to meet her requirements, and finally capture the shot tethered to the camera.

Interesting note – even though the camera was set to shoot RAW only – when shooting with the remote App, the camera defaulted to Fine + RAW – I assume to give the iPad a JPEG file to import and review as it can’t read RAW natively.

The iPad was brilliant in this set up – not only as a visual aid for the customer, but as a remote trigger, allowing me to adjust and shoot with the X-T1 without disturbing the camera/tripod.

The project went very well – the captured RAW files were processed in ACR, sharpened using NIK, and cropped and sized for the digital portfolio.

The client was really happy with the whole process, and the final image quality from the X-T1.

I used the Fuji 35mm lens exclusively for the shoot, making minor adjustments of shooting height using the tripod center column on the Induro.